Being the best at something is really hard to do when you’re surrounded by competition from everyone and everything. Staying the best is even harder because as you grow and prosper, so your competitors get to know how you do business, what your strategies are, what shortcuts they can take to get there faster, and then still steal your clients along the way!

Being second-best is all right, at times. That “front and center” feeling of crosshairs isn’t on your back all the time, and all you have to do is keep up with the best to still be second best.

When you don’t know who “the best” is, but know that you’re second-best, you can still enjoy being the best in your field, but you couldn’t be best overall because, well, you’re second best, remember? 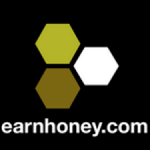 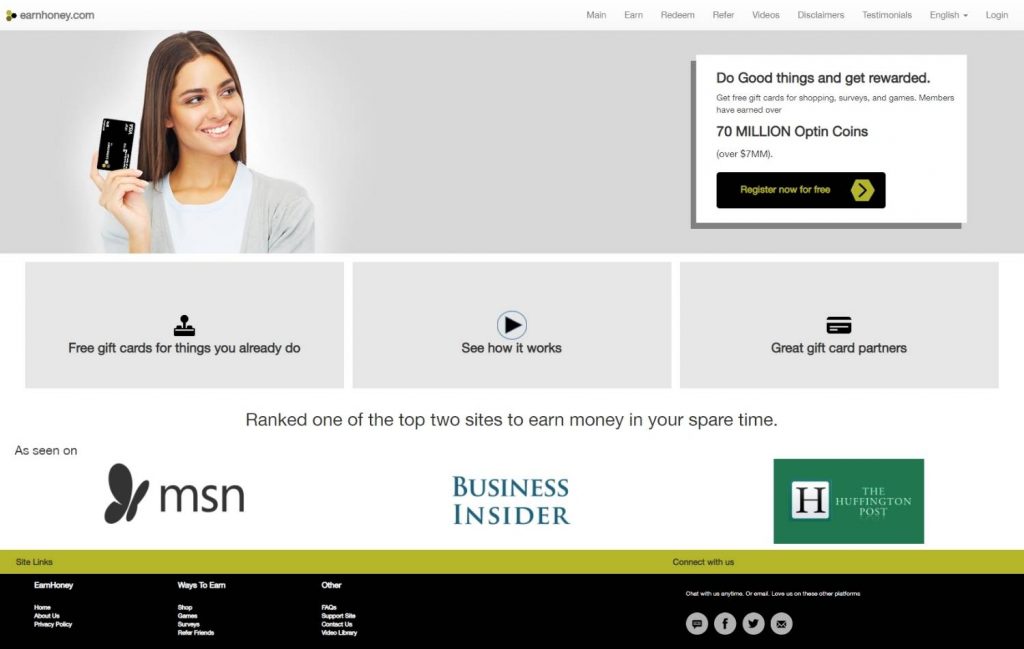 EarnHoney is another market research platform that rewards its members for their opinions, actions (keystrokes), personal information, and time. Their proprietary panel platform offers members ways to earn extra cash from home or on-the-go through the EarnHoney app.

Red flags:   Out of curiosity, I followed the links on the EarnHoney home page that indicate that MSN, Huffington Post, and Business Insider had featured EarnHoney on their respective sites. The MSN link was a dead link, and the other two links are simply survey reviews.

How Does EarnHoney Work?

Much like GrabPoints, EarnHoney has a ton of info on their website – once you’ve signed up as a member. There are a number of ways to make money online or via your Android device on the EarnHoney app.

Red flags:   There are only about 400 reviews on the Google Play Store for the EarnHoney app. Overwhelmingly, those ratings are between 1-star and 2-star ratings, resulting in an overall score of 1.8 stars.

Reading through the comments posted in the user reviews, EarnHoney stopped responding to reviews (either good or bad) around 2018. This is also around the time that HoneyDollars (as a points system) were discontinued in favor of OPTin coins.

What Activities Does EarnHoney Offer?

This is probably the fastest way to start earning extra cash from home, mostly because if you’ve completed one survey, you’ve completed hundreds of them by now. The basics don’t change and the biggest challenge with most GPT sites that offer surveys as a way to make extra money is getting to grips with their layouts and menu options.

Red flags:   The EarnHoney site is confusing for a lot of users, including the signup process. Potential members talk about not being able to make it past the CAPTCHA code screen, or they can find no way to enter a ZIP code that allows them to finish the registration process, or worse still, that once they do sign up, the amount of survey invites are limited, at best.

Note that EarnHoney is US-based, and most of the available surveys will exclude other regions by default – unless EarnHoney have stakeholders in those regions.

From what I could gather when checking out member reviews across the internet, streaming and watching videos is probably going to be the best and fastest way to make money with EarnHoney. We found that the best way to stand a chance of earning roughly $1 a day was to stream videos.

The catch? Depending on your connection and signal, you can really only earn anything if your videos are in focus. And if you’re US-based, of course.

The videos you click to watch are hosted by BuzzTV and VideoLoyalty. Both companies are BayBee LLC subsidiaries. Watching five videos will earn you about 1 cent.

Red flags:   Unlike most other GPT sites that offer videos as a way to earn extra cash or rewards, EarnHoney has you following link after link, via Facebook and partner websites, to watch videos. It’s overly-complicated, time-consuming, and falsely contributes to the popularity of those links in search rankings.

There are also no indicators that let you know if your views have been registered, if the connection is viable enough to count, or if those keystrokes are being acknowledged on any system, anywhere.

Note that EarnHoney does have a User Panel where you can check what your current credit is (OPTin coins), but we caution you to not get too excited as the rewards are really quite low, compared to other sites like GrabPoints (for example).

These could be anything from installing a meter on your Chrome Android app, to referring friends to EarnHoney, to downloading other apps or games.

Red flags:   As with most of these sites, tasks are few and far between, with millions of members all clicking at the same time. Again, if you’re not US-based, you can expect this portion of the site to be worthless to you.

Note that most apps and add-ins from any of these GPT-sites will most likely need to be installed for a set amount of time to qualify for rewards.

If you really had no other ideas about how to make money online, you could always spend your day playing games, and earning extra OPTin coins by playing games and watching the pop-up ads that are standard in most online gaming environments and platforms.

You could always refer a friend to join EarnHoney, and earn 10% of everything your friend earns while they remain a member of EarnHoney.

Red flags:   10% of a penny is 0.10 cents. Your friend would have to do ten tasks, each worth about a penny, for you to earn 1 cent. You would also have to hope that your referred friend has time to complete ten tasks worth a cent each, or you lose your own 1 cent in referral earnings.

How can I make points quickly with EarnHoney? 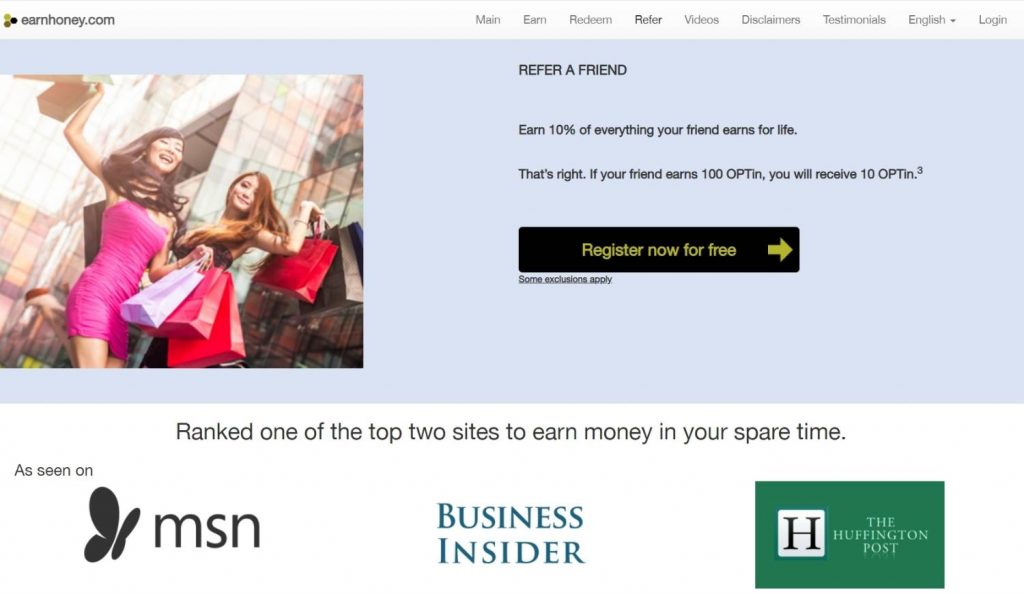 Yeah, we aren’t sure it’s even possible to earn any points (OPTin coins) in any great hurry here. Much like GrabPoints, it’s also not possible to tell what about this site will appeal to you and which parts of it you would choose to make money from.

If you could do at least one task from each of the five activities every day, you’re probably going to eventually earn enough to cash out into a reward.

How much money can you make with EarnHoney?

Considering that each OPTin point is actually only worth about a penny to begin with, it is possible to make some money with EarnHoney. We just really don’t see how they could ever be ranked as a top-paying site by anyone. Even ranking second seems like quite a stretch.

And when you use international survey sites but live in an obscure country somewhere in the world, your earning potential is somewhat less than anyone who lives in the study region. When a site like EarnHoney claims that it financially rewards its users three times quicker than other sites, you need to be aware of the fact that those claims are US-based.

Red flags:   Your earning potential is chump change, at best.

What Rewards Do EarnHoney Offer?

EarnHoney claims to pay out within 2-to-3 business days, but member reviews have been complaining about a lack of communication, lack of payouts, and a lack of feedback from support staff since roughly 2018.

If you were to be able to earn enough OPTin coins for a cash out, you could get paid through PayPal, pre-paid Visa gift cards, and Amazon gift cards. You could also donate your OPTin coins to various charities, or get paid in OPTins (which is basically considered to be cryptocurrency).

Pros and cons of EarnHoney

Although our review covered each of these, let’s take a brief look at all the red flags again:

Featured articles that are really just survey reviews by some person

Red flag 3: Site is confusing and not very well laid out

Bugs and errors plague the site

Red flag 4: Multiple redirtects before you can watch videos to earn extra cash

Red flag 5: Tasks are few and far between, but this could also be due to regional limitations

Red flag 6: Your earning potential is chump change, at best.

The pros and cons of signing up with EarnHoney are: 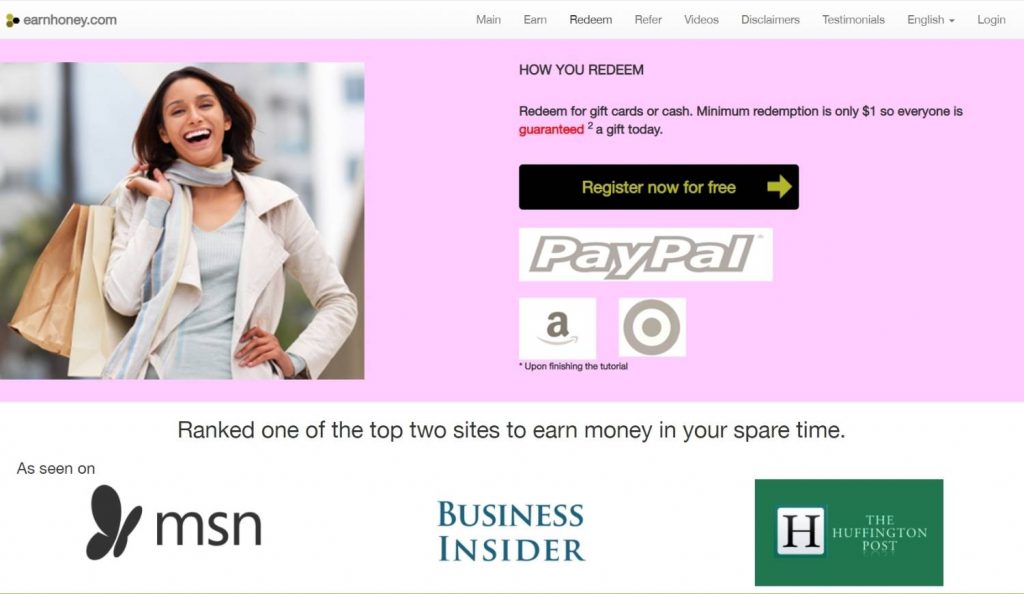 Is EarnHoney legit or a scam site?

On the opposite end of the review ratings from members, there are a few 4-star and 5-star ratings to be found. Check out the reviews for yourself on TrustPilot, the Better Business Bureau, and the Google Play Store, but the vast majority is way lower than that.

Our final verdict? If you want better earning potential from a site that claims to be one of the highest-paying GPT sites in the world, then check out our GrabPoints review here.

I am from South Africa and have been working with companies like Typeform and SurveyMonkey creating surveys for the past 5 years. Nowadays, I love reading, writing and looking after my children.