Today’s review is going to shine the spotlight on Harris Poll Online and whether it is a legitimate survey panel or a scam, and basically everything you need to know about this company.

You will get to read all and more in this completely impartial and objective review on this popular paid survey panel.

Harris Poll is the full subsidiary of Harris Interactive, a New York based company with main business in market research studies.

The parent company itself is the brainchild of Dr. Gordon S. Black, and he founded the company back in 1975 when he was still employed by the University of Rochester in New York as the professor of political science.

Back then, the new company was called the Gordon S. Black Corporation. But soon after the acquisition of Louis Harries and Associates from the Garnett Corporation in 1996, the resulting entity was given a name change and Harris Black International Ltd. was born.

Harris Poll regularly commissions market surveys that span continents (traditionally, it has a strong foothold in the continental America market but it has since ventured into Europe and Asia) and across industries.

With such a massive presence in the global market, it is no surprise to find out that the company is a recognized member of the most reputable and established marketing research organizations such as the British Polling Council, US National Council of Public Polls, the US Council for Marketing and Opinion Research, the Council of American Survey Research Organizations (also known as Casro), and the UK Market Research Society.

But I’m surprised to find out that over at the Better Business Bureau, the rating agency does not see it good enough to deserve an A+ rating.

At the same time, the company also does not have any sort of accreditation with BBB.

Don’t take this as any hint of foul play.

Across the US, there could be possibly hundreds of legit businesses that are still not BBB accredited, in spite of their reputations in the markets that they operate in.

You should simply read this as it is, the company does not with the Better Business Bureau to become an accredited business. 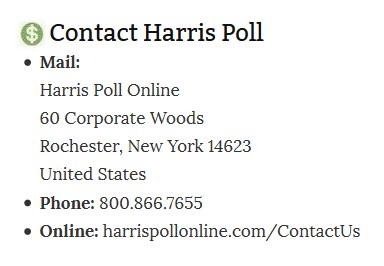 A Word About This Site’s Legitimacy

I think I can say for certain that Harris Poll is not some fraudulent act. However, their were occasions when scammers have taken up Harris Poll’s name and conducted fictitious activities such as “free gift cash” or secret shoppers.

The fact is that despite the best legislation and enforcement, there are always going to be some conmen who are out there to exploit illegal loopholes, my best advice is to stay vigilant, especially in the online world.

But let us put our focus back to our original subject.

Harris Poll is a completely legitimate survey panel, no matter how you look at it. In fact, it happens to be a really good one in its business.

As in all other survey panels, the first thing you need to do is to register as a member.

The qualifying criteria is straightforward: one has to be at least 13 years old, and in possession of a valid mailing and e-mail address.

There is no fee for membership, and you can quit any time you like.

To complete your registration, you will need to submit some personal particulars like your name, user name, e-mail, password etc…

In addition to that, you have to fill out a profile page, which you use to tell them about more intimate information on yourself, such as demographic and shopping habits.

This is what the industry refers to as a profile survey.

Granted, it is not the most exciting in the world to do but it serves a very practical (sometimes beneficial) purpose.

Harris Poll would use the information you supply to decide your qualification for individual surveys, so the information has a direct influence on how many invitation e-mails that come your way.

Moreover, this exercises could potentially save you time in the future. Otherwise, you could likely get busy with filling out feeler surveys only to discover at some point you do not really qualify for those surveys you have attempted to participate.

By default, all new members are included in their “appreciation program”.

This is the starting point as you can only start to accumulate points known as “HIpoints” through this program.

The Hippoints can later be converted into various rewards at the site.

One good thing I find on this website is that every new member is greeted with a brand-new survey as soon as the registration is over.

I also like the clarity that came with it.

For example, it would tell you the number of points to gain by completing this survey, and how long it would take to complete one. And even if you don’t qualify for this newcomer survey, there would still be points awarded to you.

Let me make this clear: you do gain points if you fail to qualify, and you will also be entered into HIstakes quarterly drawing 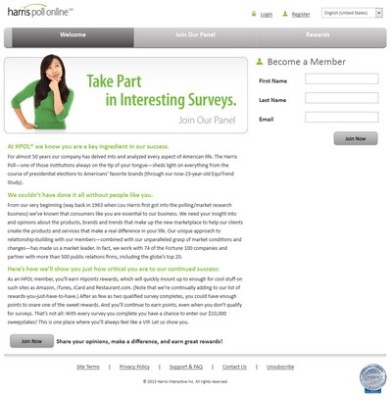 Typically, you can expect to some 3 to 4 surveys on a monthly basis, and most surveys would take no more than 20 minutes to complete, and you will be rewarded with points with every completion.

There could be times you would get invited to participate in surveys that do not reward points, but Harris Poll makes it clear that this happens very rarely.

Cash is not the reward of choice on this website.

This is not uncommon as popular players like ZoomPanel also use points system for their reward program. In HP case, it is referred to as “Harris Points” (or “HI” points) and these can be exchanged for prizes like gift cards.

A typically gift card here has a face value of no more than $10. And if you feel like giving, you can always donate your points to charities, which are listed on HP’s website.

One interesting aspect of Harris Poll is that it often includes taboo subjects like religions and ethnics among its surveys. But let it be said that a majority of surveys usually take the form of just about any mainstream surveys, from fashion to groceries, movies to music.

But all in all, it is gratifying that the site seems to make conscious effort to maintain an element of fun in its surveys, while keeping them short.

What Others Said of Harris Poll

My investigation also took me to the web to check out what other users’ experience like on this particular site.

One thing that I find intriguing is that most people have no qualm about declaring this HP being a full legit company, probably just over half of them are willing to give this site a miss, and the most common reason cited for this is its measly pay out for survey work.

I have compiled here the summary of my observation on the web, both pros and cons of Harris Poll, shared by past and present members of this online survey panel:

In view of the low pay out on offer at Harris Poll, coupled with infrequent and low number of survey invites, I would recommend that you look past Harris Poll Online if you are serious in making some real income in short time.

« SendEarnings Review: Does it Pay or is it a Scam?
iPoll Review: Is Former SurveyHead Legit or a Scam? »

Checkout InboxDollars - It is one of the highest paying paid survey sites with lots of fun surveys.